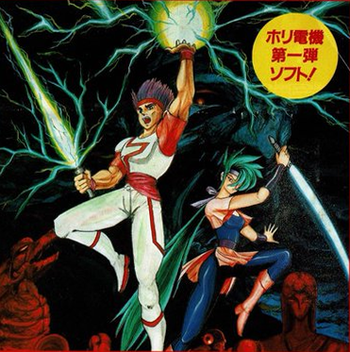 Welcome to the dark future of Earth.
"The last hope of mankind rests in the hands of an elite force of cyborgs code named: Run Sabers. Created with a superior strength, powers, and abilities, these warriors are sent against impossible odds to stop a warped scientist from fouling the entire planet. Join Allen the Thunder Saber and Sheena the Ice Saber on their world wide quest to stop the super-mutant armies and their evil master, Dr. Bruford. Armed with indestructible blades, our heroes delve into a world infested with mutated monstrosities."
— Instruction Manual
Advertisement:

Run Saber is a SNES Platform Game developed by Horisoft and published by Atlus in 1993. The game is best known for being an obvious Expy of Capcom's Strider (Arcade), having a bunch of shared elements (wall and ceiling climbing, sliding, a very similar Laser Blade), though not without adding its own spin to it.

It's the year 2998, and the Earth is hopelessly polluted, to the point it threatens human life. All hope for a recovery falls on the technology created by one Dr. Gordon Bruford, which will clease the world by harnessing a new universal energy source known as Fusion. But, in order to do that, the Earth's atmosphere will be subjected to lethal doses of radiation, so humanity has to evacuate into space colonies and wait a full year to return. This, however, was exactly what our good Doctor wanted, as he stayed behind and mutated himself into a monstrous being. The new Dr. Bruford then proceeded to engineer an army of mutants and parasites to rule over the planet.

World scientists watched in horror as this happened, and decided to put forward Project Run Saber: the creation of highly skilled cybernetically-enhanced warriors with element-based Laser Blades and immunity to the mutant parasites. Three Run Saber units are created: the Americannote Chinese in Japanese promotional material-developed Thunder Saber, Allen; the Russian-made Ice Saber, Sheena; and the German-produced Flair Saber, Kurtz. The three are sent to Earth to recover the planet; however, Kurtz suffers a malfunction and is possessed by a parasitic mutant, becoming one of Bruford's followers. Allen and Sheena must now face him and the other mutants and complete their mission.

You can play as either Allen and Sheena, the game supporting both solo and 2-player co-op gameplay. Both characters have the same abilities: they can swing their Sabers to attack, do acrobatic jumps and climb up any wall or ceiling. Their repertoire of techniques include a sliding kick attack, a dive kick engulfed in energy (which allows the character to bounce from enemy to enemy) and a spinning aerial Sonic-like saw attack. Both characters also possess a full-screen attack that eliminates everything on sight; these are stocked by finding special pickups in the stages.