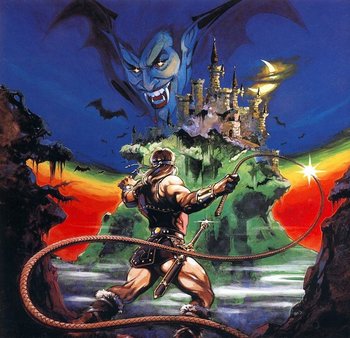 Castlevania is the first entry of the long running Castlevania series, known as Akumajō Dracula (Demon Castle Dracula) in Japanese.

The player controls Simon Belmont, the latest in a long line of vampire hunters. The Belmonts have kept the peace of Transylvania for centuries by destroying the evil Count Dracula. Dracula, being a sore loser, has risen again to terrorize the countryside of Transylvania with the help of his minions to draw Simon out for revenge. Vowing to end his reign once and for all, Simon takes up his whip and sets forth for Castlevania.

The game was originally developed for the Family Computer, but it switched to the Family Computer Disk System mid-development and became the first Konami game on the system. One month after that release, a version of the game also known as Vampire Killer was released for the MSX2 in Japan in 1986 and then Europe in 1987. It features similar graphics and the same general sequence of levels and bosses, but had numerous major gameplay and layout differences, including required exploration of stages to find the key necessary to open the door at the end of every stage. The Disk System version was also converted to its originally intended NES cartridge format in 1987 in North America, 1988 in Europe, and 1993 in Japan. This version has seen several re-releases, including on the Game Boy Advance as part of the Classic NES Series, a PC bundle alongside Contra, and a Virtual Console release.

The game received subsequent retellings on various platforms as Haunted Castle, Super Castlevania IV and Castlevania Chronicles. Castlevania on the Nintendo 64 was not one of these.