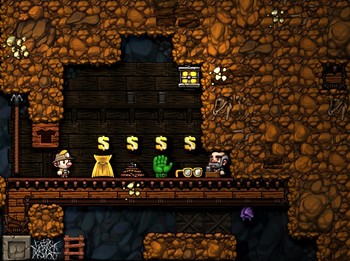 Seems like a bit of a niche market.
Screw the guy who blasts through the undead scourge and penetrates the deepest levels of the sewers to save the president's daughter. We want to know about the guy who's so badass he beat us there and set up an item shop and shooting gallery. And hey, if he's so good at getting around, why doesn't he save the president's goddamn daughter, huh? And, couldn't he find an area with a wider customer base?
— Cracked.com's 6 Video Game Gimmicks That Need To Die

In videogame dungeons, in the midst of Everything Trying to Kill You, one may find shops selling all sorts of items, varying from not actually useful to somewhat useful to absolutely necessary. If the shopkeepers are standard NPC types, there is the Fridge Logic question of how they made their way down there in the first place without getting slaughtered, and what shortcuts they are using to bring supplies in (as they often will restock after a while). The shopkeepers need not be Muggles, though; they might be friendly versions of the local monsters. In modern or futuristic settings it may be an automated vending machine, which alleviates the logistic issues, and may plausibly not tell between friend or foe. See Intrepid Merchant.

For the inverse, see Dungeon Town.