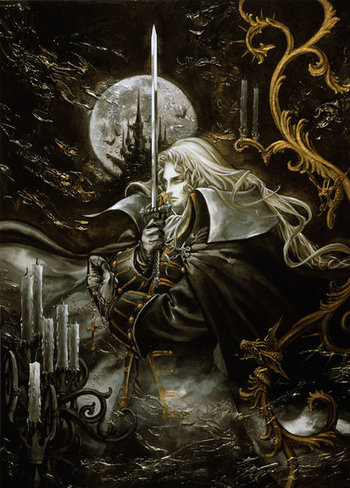 "This castle is a creature of Chaos. With each rebirth, it takes a new form."
— Alucard
Advertisement:

Castlevania: Symphony of the Night (Devil Castle Dracula X: Nocturne in the Moonlight in Japan), a PlayStation game released in 1997 (and later re-released in Japan with extra content on the Sega Saturn), has since become regarded by critics and fans alike as one of, if not the absolute best game in the Castlevania series. Symphony helped coin the term "Metroidvania", provided the earliest known entry in the series to avert the Excuse Plot trope (well, first released outside of Japan), and contained a number of oft-repeated lines about the nature of mankind that helped seal its place in gaming history.

The game begins in 1792 with Richter Belmont banishing Dracula back to Hell. Four years later, Richter disappears — and a year after that, he summons Castlevania in an attempt to resurrect the Dark Lord. The reappearance of Dracula's home causes Alucard, Dracula's half-vampire son, to awaken from a three-hundred-year slumber and enter Castlevania to figure out what drove Richter's actions. During his exploration of Castlevania, Alucard finds Maria Renard, a distant relative of the Belmont clan, who joins up with Alucard to figure out what the hell happened to Richter.

Since Metroid was on hiatus at the time, Symphony introduced a generation of new gamers to an innovative gameplay style: Alucard could wander to any point on the map that he wished, but he had to find specific relics to explore new areas. Most of these relics had bosses guarding them, which forced players to level up to increase Alucard's stats. Alucard could also find equipment to change his attacks or cast spells. Anyone who's played any Castlevania game after this one will likely find this formula familiar — back in 1997, however, this game became a Killer App for the PlayStation (whether Sony liked it or not) and it was this title that cemented Castlevania's place in the zeitgeist for an entire generation of gamers.

Symphony of the Night had two major Updated Rereleases:

Gamers seeking the original PlayStation version of Symphony can find it on Xbox Live Arcade for Xbox 360 and Xbox One, and on PlayStation Network for PlayStation 3, PSP and Playstation Vita.

The Castlevania: Chronicles of Sorrow duology acts as a pseudo-direct sequel to Symphony, with Alucard making an appearance in both games. However, it's impossible to go into it further without spoiling the entire plot of the games.

What is a trope? A miserable little pile of secrets! But enough descriptions, have some examples!