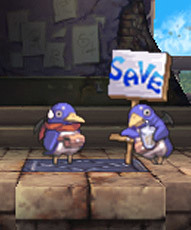 It's an old typewriter. You can save your progress.
— Resident Evil
Advertisement:

For the best experience, listen to this

Video gamers often take the technical difficulty of saving the game to disc for granted. To be able to stop the game and then restart it later from that exact same point requires that the entire state of the game be rendered into a serial representation and saved to some non-volatile medium (that is, a disk, battery-backed memory within a cartridge, or flash memory on a card). This is actually a very tricky problem, especially if you don't have the luxury of just writing out the entire contents of memory. Such a luxury certainly isn't available on platforms lacking disk or battery backup, where the save file has to be translated into a reasonably compact sequence of letters and numbers to produce a password for the player to write down. It simplifies things greatly to place substantial restrictions on where and when the game may be saved.

In the former, saving occurs only at certain breaks in the action, particularly at the end of a Game Level or chapter in the storyline. When play continues, a new level can be loaded "fresh": the state of the game will be the same for any player. Thus, all the saved game needs to contain is the number of the current level, and a comparatively small set of flags indicating whether various optional or level-independent tasks have been completed. Note that most FPS games do not let the player carry the weapons he has retrieved from chapter to chapter, eliminating the need even to track inventory in the saved game. Other genres may need to record inventory, but can still do away with recording the location of the player and enemies, as well as tracking health.

In the latter, the player can only save the game to disk or password at certain special locations in the game geography. These locations are specially marked and few in number, so, again, the game need only record the number of the current save point. This model is more common in games that do not track the movement and state of individual enemies once they are outside of the current room — when the player re-enters a room, they will generally find that the enemies have returned to their original positions. The save point often also acts to restore the player's health, so their state of wellbeing needs not be recorded in the save data. The game may allow the player to save only when they are at a save point, or it may allow saving at any time, but act as if the player had implicitly returned to the nearest save point upon restoring the game.

Though improvements in technology make more space for data, which would allow much more thorough save data for most games, many games, particularly Metroidvanias, still retain the save point model to increase difficulty by forcing players to play through levels without a break and to theoretically protect players from making the game Unwinnable by saving in an unsafe location.

Many games also place limits on the number of save files, which simplifies the tracking of these files for the game, and fixes the storage space used for such games. With passwords, of course, there is no theoretical limit on how many the player can write down.

Some games will also have a secondary save system known as a Suspend Save that can be used at any time so the player doesn't have to keep playing to the next save point. The catch is that once this save is recovered, it is erased; if the player fails to make it to a save point next time, they're sent back to the last real Save Point they reached.

A Save Point is a kind of Checkpoint. Some games with them also have Save Tokens, either offering the tokens as an alternate way to save, or forcing the player to be at a Save Point and have a Token to save. If saving is worked into the game's story, it's a Justified Save Point. A subversion of a Save Point can be a Treacherous Checkpoint.