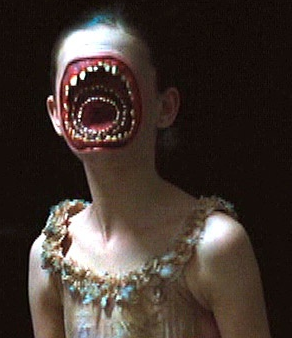 "Dental plan!"
We've all seen a lamprey mouth before: a ring- or funnel-shaped mouth with many sharp, inward-pointing teeth. Rather than being embedded in horizontal (or vertical) jaws, teeth completely encircle the oral cavity. Extreme examples may occur in conjunction with Flower Mouth. In fiction, this feature is often a trait of monstrous characters, and may offer a convenient visual shorthand implying that a creature is a parasite of some kind.
Advertisement:

On film, it's often a makeup technique used to make Humanoid Aliens of the Rubber Forehead variety appear more alien by suggesting Bizarre Alien Biology through its outward appearance. Such an orifice could also appear on a radically non-humanoid creature. Common in horror, where it may convey Eldritch Abomination implications.

A common feature of Sand Worms or an Ant Lion Monster, and an occasional Cthulhumanoid may sport one. Does not cover insect-like mandibles.

Often overlaps with More Teeth than the Osmond Family. Sub-Trope to Monster Mouth.