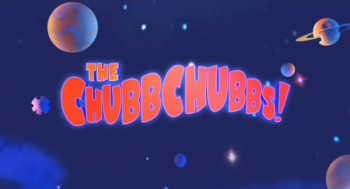 The ChubbChubbs! is an animated short film (5 1/2 minutes) from 2002, directed by Eric Armstrong for Sony Pictures Imageworks.
Advertisement:

Meeper is the janitor at the "Ale-E Inn", a bar for aliens somewhere out there in the depths of space. Meeper has dreams of singing karaoke on the bar's stage, but after he accidentally electrocutes the club singer, he is fired, and literally thrown out of the bar.

Just as Meeper is taking stock of the situation, an alien who looks suspiciously like Jar-Jar Binks shows up and, right before he collapses, warns that "The ChubbChubbs are coming!" Meeper, who sees some terrifying monsters approaching on the horizon, tries to warn the patrons of the bar, but is thrown out again for his troubles. Finally he's left trying to protect some cute little furry hamster/chick creatures huddled outside the bar from the approach of the hulking, monstrous ChubbChubbs.

One of the monsters start to sing "Why Can't We Be Friends" along with Meeper. He stops when the others look at him disapprovingly.

Example of:
Actually Quite Catchy

One of the monsters start to sing "Why Can't We Be Friends" along with Meeper. He stops when the others look at him disapprovingly.