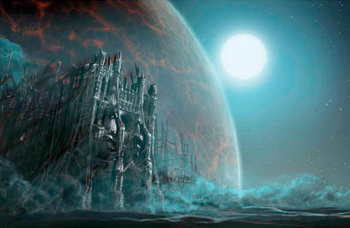 The Cathedral is a 2002 animated short film from Poland by Tomasz Baginski, which won "Best Animated Short" at SIGGRAPH festival that year, and received an Academy Award nomination in the same category. It is six minutes long, and can be watched here

A man is walking on the surface of an alien planet—it's definitely an alien planet, since there's a whacking big binary planet orbiting the one he's on at very close range. As the second planet passes in front of the sun to and throws the man's planet into darkness, the man sees what appears to be a medieval-style cathedral. What the cathedral is doing on some alien planet is not explained, especially since the rest of the planet appears to be nothing but bare rock. In any case, the man enters the cathedral and finds that the pillars of the cathedral are actually tree-like objects growing up from the ground. And there are faces in the trees...

Unrelated to the 1986 PBS documentary, the 2019 Metroidvania Cathedral, or the Engish Doom Metal band Cathedral.