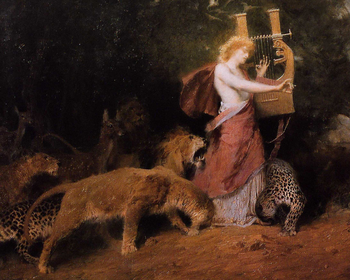 "Whenever the evil spirit from God came on Saul, David would take up the lyre and play. Then relief would come to Saul; he would feel better, and the evil spirit would leave him."
— 1 Samuel 16:23, The Bible
Advertisement:

Music, magic or not, can soothe savage beasts.

Original quote this title originates from is, "Music has Charms to soothe a savage Breast." The phrase was coined by the Playwright/Poet William Congreve in The Mourning Bride, 1697. note  The quote is used contemporarily still, just cf. the intro of the album "Smash".

Pooh sings a lullaby to send the bees to sleep so he can sample their honey unguarded.

Pooh sings a lullaby to send the bees to sleep so he can sample their honey unguarded.