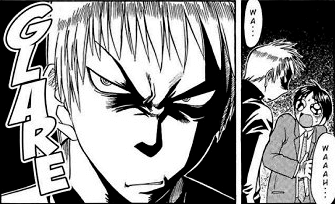 Aeron gave him a baleful look, the look that had been known to sour wells and make women barren.
— A Song of Ice and Fire
Advertisement:

There are times even the Deadpan Snarker should know better and just shut up. This is especially true if the person being snarked at is giving him the Death Glare.

The Death Glare is a "calm", murderous look often coupled with a tensed and menacing posture, others with a deadly stillness, but (with the rarest of exceptions) is served with deathly silence. The Death Glare is hard to pull off, but, done right, can convey a depth of anger and potential violence that no Badass Boast or Pre-Asskicking One-Liner can hope to top.

This can be used by any character (yes, even that Deadpan Snarker) under Break the Cutie, Heroic BSoD, Icy Blue Eyes, or other highly trauma/emotion causing pressures. Again, someone who's gently (or violently) pressing their Berserk Button may get this as a warning to stop before some Unstoppable Rage or Disproportionate Retribution is let loose.

Yeah, you really should Beware the Nice Ones (or the quiet ones (or the silly ones)).

See also Killing Intent, Lightning Glare, Determined Expression, and Disapproving Look. Frequently executed with a Kubrick Stare. This can also be a silent version of Give Me a Reason if the person giving this is known for reacting violently to mistakes. Not to be confused with Eye Beams or Deadly Gaze, which can literally kill with a look. If someone glares down something way bigger or more dangerous than them, they are Staring Down Cthulhu. May be inflicted unintentionally by characters who unfortunately have the Face of a Thug.

Suppose two characters Death Glare each other? Best you get out of there quick!

When Charlie Prince sees this glare leveled at him he knows his ticket's been punched.

When Charlie Prince sees this glare leveled at him he knows his ticket's been punched.