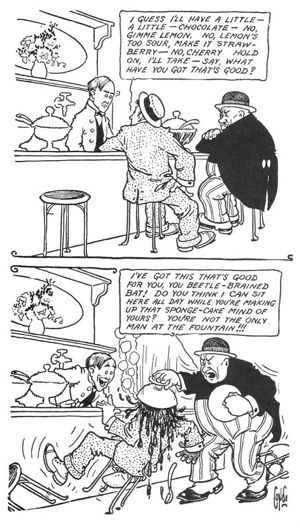 Two-panel newspaper comic from the 1900s with a setup as follows:

The simple setup just works, however, because all the situations are things people could relate to at the time, and many of them apply even today. For example, Everett is attending a baseball game when a group of men crowd him and say to him "Did you see that?" "Did you see that hit?" "You should have seen that!" He beats them up, saying "Yes, I saw that! And I'd love to see what's going on in the field right now if you'd all get out of my face!" Or Everett is being told by his doctor that he doesn't really have a medical problem and that he's just imagining the pain. In the next panel, Everett's beating up his doctor and telling him "This pain is all in your head. It's not really there. You're just imagining the pain."

And so on. Just think of your own personal pet peeve about everyday life, and imagine someone beating up the person responsible for it. Everett True becomes your hero.

The strip is definitely a product of its time however. Some of the situations that occur in the comic don't really make sense in modern society due to changes in social norms or lifestyle (people don't ride horses anymore, for instance), and there's occasional Values Dissonance. Everett only beats up men, and mostly just yells at women. Sometimes he gets back at women other ways, such as throwing a woman's puppy out the window because she was openly doting on it too much and annoying the other passengers on the train, or destroying a counter where several female clerks were working. There are some strips where Everett is the target of punishment for his wife, Mrs. True. Adding to the charm is that frequently Everett True uses verbose, but not imprecise language to scold whoever is annoying him at the time.

Still, by and large, The Outbursts of Everett True is entertaining if only to watch a parade of Asshole Victims get what they deserve.

The Outbursts of Everett True provides examples of: