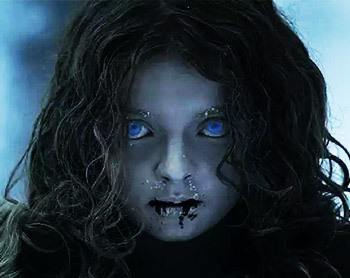 These blue eyes indicate a character who either is demonic or possesses the "evil eye", magic, or witchcraft. In Mediterranean countries, this comes from the Demon's Eye amulet, which is always blue. Blue (or gray) is also the eye colour of choice for many wizards who are eerie or sophisticated instead of mysterious.

Commonly, these eyes weren't originally blue, but became that way through prolonged use of magic.