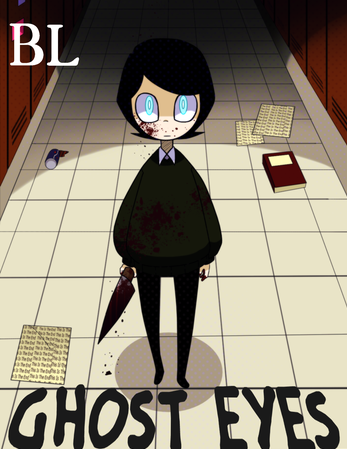 "A human is only in its purest form when it sleeps... or is afraid."
Advertisement:

Tobias Schneien is a fifteen years old boy who's been homeschooled his whole life until now. Raised in a church in the woods with his many siblings, tentative mother, and religious father, Tobias is wrought with severe paranoia of being in this public place with peers by himself. His only comfort here are the voices in his head, the blade in his hands, and the God he keeps his faith in.

(Oh, and the fact that most of the voices he hears, as well as the weird tall man only he can see, might actually be real, but that is anything but a comfort. Far from it, actually.)

This all begins to change when he meets an odd boy who wants to show him just how fun being a devil can be and life falls into a place Tobias feels he can never escape.

Even if he wanted to.

is a Psychological Horror Boys' Love webcomic written by user Mr. Circus Papa. It's also available to read on Tapas

Like it's inevitable these days, it now has its very own wiki.