Manga / The Case Study of Vanitas 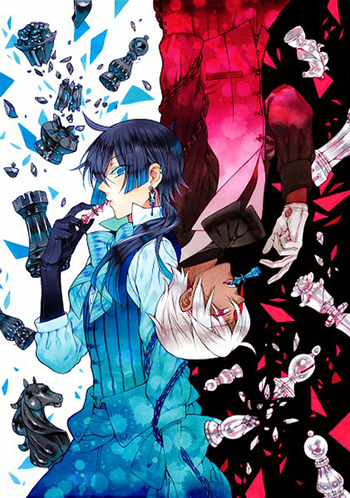 "I'll do as I please, use methods I choose, and, no matter what you people want... I will save you without fail!"
— Vanitas

Stories tell of a mysterious clockwork grimoire called The Book of Vanitas which, once opened, is said to place a curse upon the reader that is worse than death itself. Drawn to Paris on rumors of the book's existence, Noé, a vampire, boards the airship La Baleine to confirm it for himself. There, he's suddenly attacked by a fellow vampire who loses control of herself after her true name, the foundation of a vampire's self, is corrupted.

In steps the enigmatic, self-professed "vampire doctor" Vanitas wielding his namesake tome, which he uses not to curse but to cure. Claiming he inherited the book as well as his name from the original Vanitas, a vengeful vampire born under the ill-fated blue moon, he cheerfully recruits Noé to work with him in eradicating the malady that's robbing vampires of their true names — and their sanity.

The Case Study of Vanitas (Vanitas no Carte, or The Memoirs of Vanitas) is an ongoing 2016 Steampunk fantasy manga by Jun Mochizuki of PandoraHearts fame. It runs in Square Enix's monthly Gangan Joker magazine and is simulpublished in English by Yen Press.

The Case Study of Vanitas contains examples of: