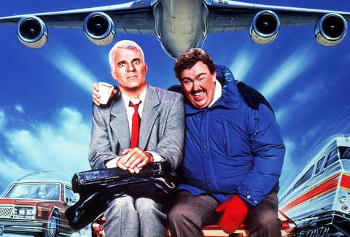 A story about two friends and their adventures. The buddies in question serve as dual protagonists. The friendship itself will provide much of the drama along the way, as the buddies in a Buddy Picture are usually an Odd Couple.

Also known as "Wunza" ("One's a") movies, aptly named by Roger Ebert, as the plot generally revolves around the characters' clashing personalities and professions (For example, "Wunza cop, and wunza kid").

The resolution of a Buddy Picture typically depends on the friends working in concert together to defeat a common enemy and reap a shared reward. Needless to say, the Buddy Picture is fueled by The Power of Friendship.

As with any genre, there are certain flavors that spring up over and over. Sometimes the buddies involved don't start as buddies, but bond over their shared adventure. Almost always things come between them. Occasionally one of the buddies in the Buddy Picture is focused on a little more, making him or her the primary protagonist. Though scenarios like these can change the shape of a story a bit, don't be fooled: it is still a Buddy Picture.

The Buddy Picture can manifest itself in many diverse settings, and the central relationship can exist in many sorts of plots. Because of this, the Buddy Picture is typically crossbred with other more plot-dependent genres, such as westerns, action-adventures, and road movies. One of the most common variants of this type of story is the Buddy Cop Show. If the story is a comedy that focuses solely on the relationship between male Heterosexual Life-Partners, it is a Bromantic Comedy.

Historically, the Buddy Picture flourished particularly well in film, hence the name. However, this genre can be found in all media, as evidenced by the examples below. Because of this, the trope has Buddy Genre as a redirect for use on works pages that aren't classified as films.