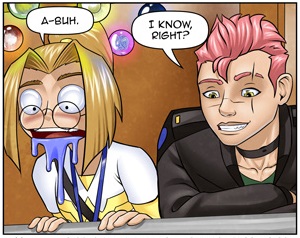 The multiple-character Shirtless Scene was one panel above.
Advertisement:

Humans drool in anticipation of food, when asleep, and for other reasons. For this trope, a character drools because they are acting/thinking in a perverted manner. Sometimes accompanied by leering. If a character does this while they are doing Attempted Rape of another character it helps to make them even more depraved.

Compare Something Else Also Rises, for when arousal is depicted through a visual metaphor. Tongue hanging out and Wolf Whistle are optional. Sister Trope to Nosebleed. See also Maniac Tongue.