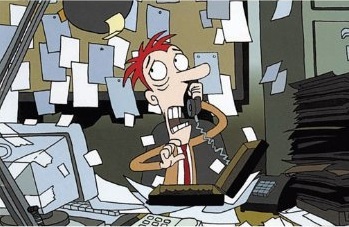 Think modern life is stressful? Well, just be thankful that you're not Eric Feeble, the perpetually struggling, forty-something and unfortunate star of this short-lived British black comedy animated series, and arguably one of the darkest shows ever made in this category. The series lasted for 13 episodes over two seasons, both broadcast on BBC Two in 1998 and 2000, respectively;note The first season was briefly broadcast (albeit partially redubbed and edited) in August 1998 on NBC in the United States. the first season (but not the second) was co-produced by Klasky-Csupo.

Eric is a divorced father of two and the primary caregiver for both of his kids...which is a stressful duty. Brian, Eric's son, seems to have a learning disability; he is 9 to 10 years old, but has already flunked classes for three years. He doesn't speak at all, wanders aimlessly, and has a tendency to place random items into his mouth. Claire, Eric's daughter, is notably frail; she is 6 years old and her immune system is hypersensitive. She has allergic reactions to just about everything, and has to eat special regulation food. Which doesn't stop her from craving for regular food. Maria, their Portuguese au-pair, is alcoholic. Eric's ex-wife Liz currently lives with another man, and tries to rediscover herself through following New Age ideas, which doesn't prevent her from incessantly calling Eric when she feels like it.

The work environment of Eric isn't much better. His office is sandwiched between the janitor's closet and the men's toilets. Paul Power, his boss, is a very demanding individual. Never satisfied with Eric's work, Mr. Power has demoted him in previous occasions and is always ready to press him further. Eric also has his personal secretary Alison Scabie; unfortunately for him, she provides no actual help, and treats the office line as her personal phone, speaking constantly with her friends, leaving Eric saddled with her work as well as his own.

Eric has an additional reason to feel like a failure. He compares himself to neighbor Ray Perfect, a man who seems to have the perfect family and a great career. Eric finds himself needing the assistance of Doc, his family doctor, who is ready to provide with plenty of medication. Too bad said medication has nothing to do with his stress.