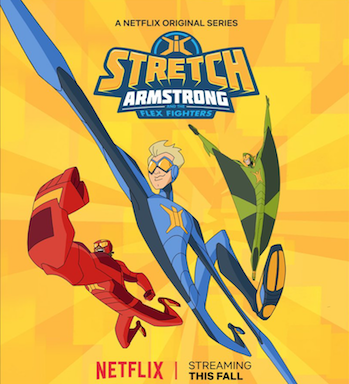 They're the long arms of the law.
"We're not just kids anymore. It's time for us to step up!"
— Jake "Stretch" Armstrong
Advertisement:

The show centers on three teenagers, Jake Armstrong (Scott Menville), Nathan Park (Steven Yeun) and Ricardo Perez (Ogie Banks), who become exposed to a toxic chemical called Flexarium that gives them super powers. Jake becomes Stretch Armstrong (who has super stretching abilities), Nathan becomes Wingspan (who gains the power to grow and retract stretchable, gliding suit-like wings), and Ricardo becomes Omni-Mass (who gains the ability to change his size and mass). Together, they navigate life through high school as they learn to control their powers, and make new friends. However, they also have to deal with an underlying conspiracy who’s curious about their powers.

The show also has an interactive episode entitled "The Breakout" that takes place in between seasons one and two, which was released on March 13, 2018. Season two, which is made up of 10 episodes, was released on September 7, 2018.

Please move any character tropes to the Character Sheet.