Western Animation / Reign of the Supermen 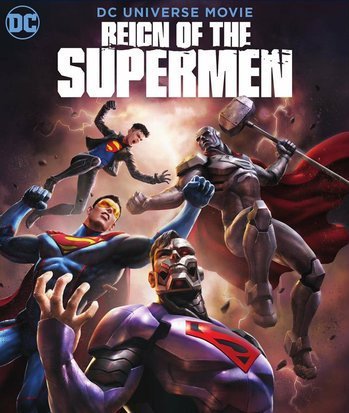 Superman is dead, having fallen in battle defeating Doomsday. However, that's not the end of the story, as Superman's tomb is empty and four men — a man clad in Powered Armor, a teenaged clone, a ruthless vigilante with a willingness to use lethal force, and a cyborg — rise up, each one believed to be the resurrection of Superman. But who, if any of them, is the real Superman?

Reign of the Supermen is a 2019 film in the DC Universe Animated Original Movies line and the second part of the story that started with The Death of Superman, set in the DC Animated Movie Universe. In addition to the returning voice actors including Jerry O'Connell as Cyborg-Superman, Cress Williams as Steel, Rebecca Romijn as Lois Lane, Rainn Wilson as Lex Luthor, Jason O'Mara as Batman, Rosario Dawson as Wonder Woman, Christopher Gorham as The Flash, Nathan Fillion as Green Lantern, Shemar Moore as Cyborg, Nyambi Nyambi as the Martian Manhunter, Charles Halford as the Eradicator and Bibbo Bibbowski, Paul Eiding as Jonathan Kent, and Jennifer Hale as Martha Kent, the cast includes Cameron Monaghan (Gotham) as Superboy and Tony Todd reprising his role from the LEGO DC Comics Super Heroes specials as Darkseid (replacing Steve Blum).

This film and its predecessor were rereleased on October 1, 2019 in a Extended Cut Compilation Movie, The Death and Return of Superman.

Alternative Title(s): The Reign Of The Supermen