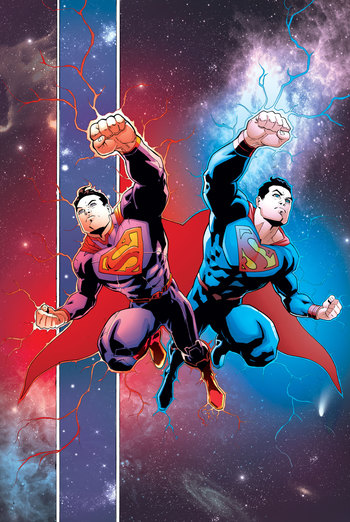 Superman: Reborn is a four-issue Superman family crossover story arc that was published in 2017. It was told in the Superman (Rebirth) and Action Comics books, with Peter J. Tomasi, Patrick Gleason and Dan Jurgens as the writers. It was the first major Superman story arc in the DC Rebirth event.

Ever since the pre-Flashpoint Superman's return, he has been haunted by a mysterious man claiming to be Clark Kent, a Clark who was hidden away by The New 52 Superman but returned after his death at the end of The Final Days of Superman. However, things went completely dark when Lois Lane, attempting to discover the deal with this Clark, ultimately blew him off when he attempted to propose marriage to her. The strain of it all has caused him to snap and remember who he was and he'll take everything the real Clark has...

The story encompassed the entire March 2017 Superman titles with aftermath effects through other titles. The "Aftermath" storyline in Action Comics in particular focuses on it.

Also present in the story is the mysterious Mr. Oz, who has shown an awareness of Superman's place in the DCU and of the wider mystery regarding the New 52's creation. His subplot is dealt with in "The Oz Effect".