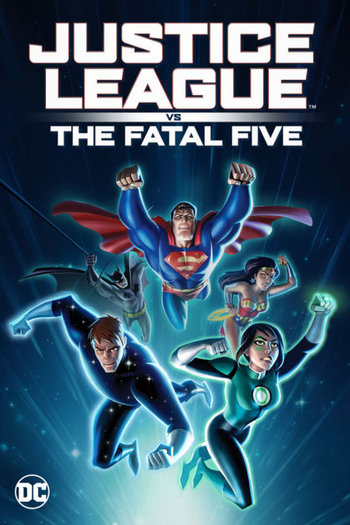 A legacy in danger, a league in action.
Advertisement:

Justice League vs. the Fatal Five is a movie in the DC Universe Animated Original Movies released digitally on March 30th, 2019, and on DVD/Blu Ray on April 16, 2019.

Superman, Batman, and Wonder Woman find themselves facing a powerful new threat — the Fatal Five, who have traveled back in time from the 31st century to terrorize Metropolis in search of a younger Limelight — the then-newest Green Lantern, Jessica Cruz. With help from a hero from the distant future, Star Boy, the Justice League faces one of its greatest battles against evil yet.

The cast includes Kevin Conroy as Batman, Susan Eisenberg as Wonder Woman, and George Newbern as Superman, all reprising their roles from Justice League.

Here is the trailer