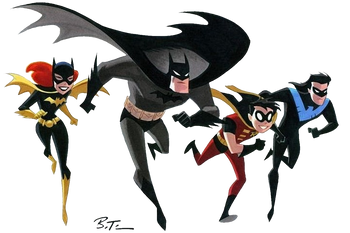 Timm Style is a style of animation. Characters are drawn with fairly realistic, though somewhat exaggerated, proportions and small eyes all round (though villains' eyes may still be slightly narrower than those of the heroes). People are drawn with lots of straight lines rather than curves, which makes them look rather angular. From 1996 forward, male characters, especially those who are meant to be very muscular like Batman or Superman, tended to be drawn with large upper body mass while having rather thin legs.
Advertisement:

This style tends to be used in action series, so characters and clothing will usually be drawn with just a few colours, simple shading and minimal textures to make them easier to animate.

Among the artistic influences Timm has cited for this style are Chester Gould's Dick Tracy (look at Batman's jaw!), and Dan DeCarlo's style of drawing pretty girls in Archie Comics as well as his less innocent pin-up style works. Alex Toth used a similar style during his days at Hanna-Barbera.

This wiki commonly misuses the term Animesque to refer to these, though there is occasional overlap. For a quick little reminder, think of faces. While Animesque may exaggerate eyes, Timmstyle will choose simpler features (in fact, Skintone Sclerae and Black Bead Eyes are quite common in Timmstyle works). Pretty much faces are different, bodies are the same when comparing these two styles.

It is named for Bruce Timm, an artist and animator for DC Comics who uses this style. As a result, it's quite common in animated adaptations of DC properties, particularly the DCAU and occasionally DC Universe Animated Original Movies.