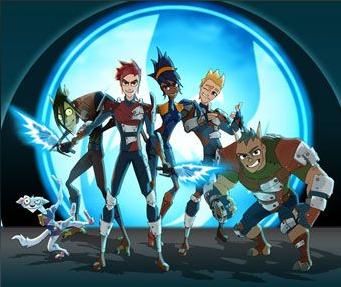 The sky is never the limit.
"Atmos. World of a thousand mountaintop kingdoms, each protected by a Sky Knight against the forces of darkness: beasts, rogues, and worst of all, Cyclonians. The greatest of all Sky Knights led the Storm Hawks. His mission: unite the kingdoms and rid Atmos of evil forever. But he was betrayed, the Storm Hawks defeated, and all hope lost... Until now."
— Opening narration by Aerrow
Advertisement:

Storm Hawks (2007-2009) is a Canadian animated action/adventure series made by Nerd Corps Entertainment and involving giant flying motorcycles, powerful crystals, and a gang of plucky teens out to save the day. Like a lot of the shows Nerd Corps has done, it's a Troperiffic piece styling itself in the vein of classic Saturday Morning Cartoons and running almost entirely on Rule of Fun and Rule of Cool.

The show is set in a fictional world called Atmos, a largely mountainous world consisting of scattered landmasses known as terras. Because of the geography, travel is largely dependent on flight. The technology of Atmos is based around energy-generating crystals, used to power the various devices in the series. Patrolling the skies of Atmos are the Sky Knights, groups of warriors who pilot motorcycle-like vehicles that can semi-transform into flying machines. These warriors are loosely managed by the Sky Council.

In the Backstory of the series, an Evil Overlord named Master Cyclonis and her people threatened Atmos. The original Storm Hawks led the Sky Knights in a war against them, but were betrayed by one of their own, the Dark Ace. Despite this, the attack was apparently successful, though the Storm Hawks did not survive the war. Ten years later, a group of teens (some human, some not) discover the wreckage of the Storm Hawks' carrier, the Condor, and unofficially take on the Storm Hawks name in the hopes of becoming Sky Knights themselves, despite most of them not even being old enough to legally fly the vehicle. Their youth defeats their ambition, however, as neither friend nor foe take them seriously because of it.

This changes when they are brought into conflict with a new Master Cyclonis, one no older than they are but still just as dangerous. Among her followers are the Dark Ace, now famous for his betrayal and unmatched skill; Snipe, a mace-wielding strong man with a fondness for smashing things; Ravess, an archer who brings a violin-playing henchman into battle for theme music; and Repton, a mercenary lizard man who leads his people under Cyclonia for the riches. By managing to foil Cyclonis' plan, they are recognized by their peers.

The rest of the series focuses on the Storm Hawks' continuing mission to protect Atmos from the Cyclonian threat, in turn putting themselves in extreme danger by doing so. Of course, they have plenty of unrelated adventures along the way.

As the second production of Nerd Corps following Dragon Booster, Storm Hawks was instead produced in association with YTV. However, Cartoon Network in the United States also helped out a little with production and would also air the series stateside, becoming among the first in a slew of Canadian imports that would rise to prominence on the channel during the late 2000s and early 2010snote although it was far from the first Canadian cartoon to air on CN, or American TV for that matter. It ultimately ran for 2 seasons and a total of 52 episodes, ending on a mild Cliffhanger, with the story not completely over. With no further seasons being commissioned by the networks, the studio soon moved onto its next project, League of Super Evil, which also aired on both YTV and Cartoon Network.

As the tentacles circle him, Stork lets out some nervous giggles in between his stammering and shrieking.

As the tentacles circle him, Stork lets out some nervous giggles in between his stammering and shrieking.