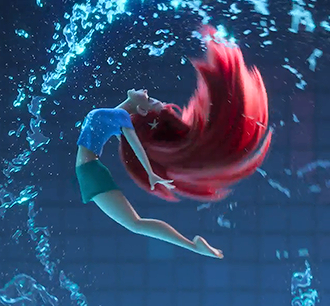 Ariel's splashing to the surface with style.
Advertisement:

A character who was underwater (usually a woman with long hair) emerging in a massive splash, bending their spine and throwing their head back in a way that makes all to almost all of their hair flip backward and fling some water droplets from the splash over themselves in an arc, occasionally having their eyes shut and mouth hanging open.

While some examples existed before, Princess Ariel from The Little Mermaid is without a doubt THE Trope Codifier. The visual of Ariel striking this pose became one of Ariel's most famous moments and basically guaranteed that it would forever be associated with mermaids. Ironically, when Ariel performed this hair flip/splash combination she wasn't a mermaid. It was when Ariel was turned human for the first time and emerged from the ocean after almost drowning. This is why characters having their eyes shut and mouth hanging open like they're struggling to breathe is often part of this pose, even if it doesn't make much sense like when it's a creature who can breathe air AND water.

This is not an uncommon pose to see in scenarios involving water for a lot of reasons.

This trope can be subject to Rule of Cool (and/or Rule of Sexy if it's being used for Fanservice) at times, due to how hard it would be to have most of your body rise above deep water like this.

In the instances where this is played for Fanservice, this counts as a Sub-Trope of Sexy Surfacing Shot for when a character who was subermged underwater gets out of the water in a way that is meant to draw the audience and/or other InUniverse character's attention to their physical attractiveness.