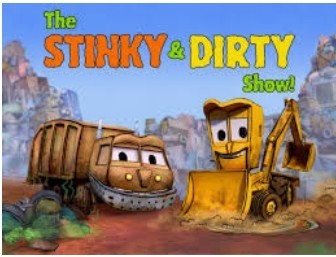 The Stinky & Dirty Show is a preschool show developed by Guy Toubes based on the Stinky & Dirty books by Jim and Kate McMullan. Its pilot came out on January 15, 2015 on Amazon Prime Video before officially premiering on September 2, 2016. To quote the description:

"The adventures of best friends and unlikely heroes, Stinky the garbage truck and Dirty the backhoe loader, a dynamic and hilarious duo of resourcefulness that learn that when things don't go as expected, asking "what if" can lead to success. "