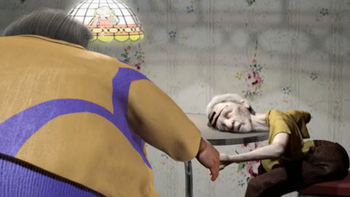 What has happened to us, my songbird?
Advertisement:

is a "psychorealistic" National Film Board of Canada short film by Chris Landreth (known best for his animated short called Ryan). Mostly told from the POV of a fellow group member named Angela, the short is about the relationship of Dan and Mary, who've had 26 years of Awful Wedded Life. The short starts at the group counseling session for codependency where Mary interrupts Dan and the therapist to say what she's upset with Dan about. Her tirade continues in the couple's kitchen where Dan takes her hand and asks her a question.

Tropes for The Spine: