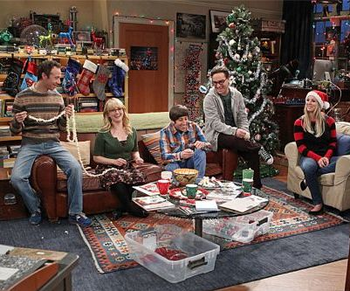 Note that unlike other holiday episodes included in a series, the Christmas Episode is usually a special production or commission separate from the season it occurs alongside; as such, it generally just features the series' core cast (and sometimes, popular secondary characters) and is not necessarily in continuity to the rest of the season — though it can also be used to set up major changes in continuity through events such as a Christmas wedding or (and this is a popular one for obvious reasons) a Christmas birth, which can then be canonized in the next year's season. Alternatively, the Christmas Episode may be the last-ever episode of the series, as happened with the UK version of The Office, Doug (before getting Un-Cancelled), Invader Zim, Roary the Racing Car, and Only Fools and Horses (although the latter had more Christmas Episodes commissioned afterwards). It is not unusual for British sitcoms to continue producing new Christmas Episodes for several years after the show has finished as an ongoing series; the final series of The Royle Family was aired in 2000, but new Christmas specials continued to air sporadically until 2012, and more than half of Mrs. Brown's Boys ended up being specials in a similar manner.

In Britain, a more recent variation is a specially recorded Christmas day message on Channel 4 which is then run in competition with the Queen's televised Christmas message (recent years have seen announcements from Ali G and Marge Simpson). However, since this is breaking the Fourth Wall, it is not typically part of an actual story.

During the 1980s and 90s, British Christmas specials usually took place in some decidedly un-Christmassy part of the world such as Florida (Only Fools and Horses) or Majorca (Birds of a Feather). This has proven unpopular in recent years.

If a Christmas Episode is depressing in tone, this is a case of Twisted Christmas. British Soap Operas in particular tend to make the Christmas Episode the most depressing episode of the entire year. (Which is saying something; Brit soaps like EastEnders tend to be depressing anyway.) It is not uncommon for a long running character to die in Christmas Episodes of this kind, and another occurrence is a disastrous wedding where everything goes wrong and the wedding doesn't occur, or a disastrous birth where the baby, mother or both die in the process.

May overlap with Vacation Episode if travel is involved.

See also Christmas Special, which is based on Christmas itself instead of a pre-existing series. Also see You Mean "Xmas", where a world where Christmas doesn't exist gets a similar holiday for the purposes of having an episode for it. Compare Christmas in Japan. See April Fools' Plot or Very Special Episode for another themed episode found in shows. If the plot is taken by a certain Dickens' tale, you might be prompted to say Yet Another Christmas Carol. Action-adventure shows may have An Ass-Kicking Christmas if those elements don't take a holiday. Dramatic shows may lighten up the tone for a Merry Christmas in Gotham. Saving Christmas, of course, is not unheard of. Expect an "Everybody Helps Out" Denouement.

Look out for the theme tune of the Christmas Special being customized for the season, perhaps with sleigh bells and snippets of things like Jingle Bells, and the opening credits being overlaid by lots of jolly things like tinsel and glittering snowflakes.