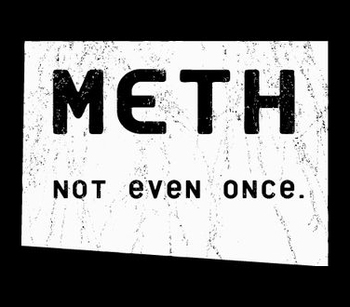 Meth. Not even once.

(Initially the Montana Meth Project, later expanded to other states) is a non-profit organization known for its saturation-level advertising campaign aimed at teenagers, warning of the negative consequences of trying methamphetamines even one time. The television advertisements — at one point, there were 30 ads, at least from 2005-2012 — were spread out over several waves and used different approaches each time, but the common elements involve the deterioration of the teen's health, social and family life, living conditions and moral and social compass; many also use deep regret but a resignation to hopeless addiction.

The waves were as follows:

The campaign has two official websites: One one when it was just the Montana Meth Project,

and another for the statewide Meth Project.

Tropes from the ads include: