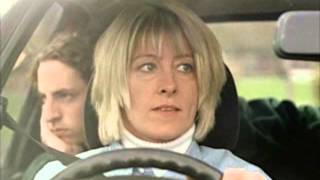 Who are you prepared to kill?
"Like most victims, Julie knew her killer... [Beat] ...it was her son... ...who was sitting behind her without a seatbelt. After crushing her to death, he sat back down."
Advertisement:

Julie Knew Her Killer, otherwise known as simply Julie, is one of the most serious and infamous 1998 British road safety public information film which warns the audience about the importance of wearing a seatbelt at the backseat. The PIF was widely popular and very memorable to the community that it aired in numerous countries from 1998 to 2003.

The plot is about Julie simply driving her two teenage children to school. Both Julie and the daughter were buckled, but the son who was at the backseat wasn't. As Julie concentrates on the road, she is concerned that a white Ford Transit was tailgating her and tries to avoid it. As the van turns from a junction, Julie was relieved... only to crash into a parked car. Her son, who was at the back behind her was then propelled forward, smashing Julie's skull in the process with his forehead, instantly killing her. The daughter horrifically screams as she sees the lifeless Julie lying across the wheel, while the son, who has a nasal fracture was confused of the situation.

Originally by DETR note Department of the Environment, Transport and the Regions, it was later re-aired in 2007 as part of the THINK! campaign, albeit in a shorter 30 seconds advert.