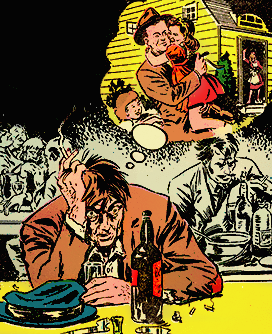 "When I was sober, my family loved me. And my hat wasn't blue..."
"I need morphine! Is it true that my eyes are like buttons? I feel gripes inside my belly, as if I am filled with straw."
— Catherina, Pathologic
Advertisement:

When a drug addict is left a physical and mental wreck from their addiction to drugs or alcohol. The signs are typically what they would be in real life; their visage noticeably deteriorates, they are increasingly unreliable and regularly fail to meet obligations, are often visibly drunk or strung out and, if they are on drugs, may be associating with sketchy and often dangerous people, and are also prone to theft, scams, and scheming to acquire money to feed their habits. The decline is often documented as a way of showing Drugs Are Bad. This is distinct from the Functional Addict (who is still capable of accomplishing the tasks of everyday life), but the Functional Addict may become this. In cynical works, this can be the endpoint of a Descent into Addiction character arc.

Also distinct from The Alcoholic (where the character trait is simply that they are usually drunk), but there definitely can be overlap.

The Logical Extreme is someone being killed by their addiction. If they're part of a Very Special Episode, they may get support and become a Recovered Addict.