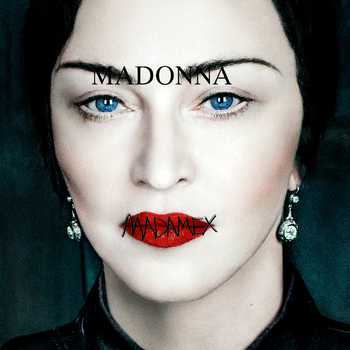 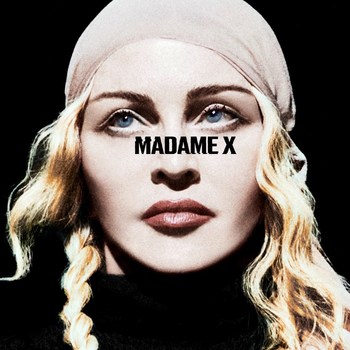 "The thing that hurt me most was that I wasn't lost" (lyric from "Extreme Occident")
I took a trip, it set me free
Forgave myself for being me
Advertisement:

Madame X is the fourteenth album recorded by American pop singer Madonna. It was released through Interscope Records on June 14, 2019.

The album was Madonna's best-reviewed record since Confessions on a Dance Floor (2005). In general terms, the album was praised for its unique and experimental sounds.

In the long run, however, that didn't translate to commercial success, as it scored a 70/100 rating from review aggregate website Metacritic. While Madame X became Madonna's ninth album to top the Billboard 200 album chart—her first in seven years—it ended up only selling 169,000 copies in the United States. The only certification it earned was a Gold record in Italy.

The album was supported by four singles: "Medellín" (with Colombian singer Maluma), "Crave" (with American rapper Swae Lee), "I Rise", and "I Don't Search I Find". While all four hit #1 on the Billboard Dance chart, none of them featured on the Billboard Hot 100 at all, with "Medellín" hitting a wall at #87 on the UK pop chart.

note "Extreme Occident" and "Looking for Mercy", appear on the vinyl, Japanese, deluxe, and 2-CD deluxe editions only.

note  This remix is only available on the Japanese deluxe 2-CD edition.