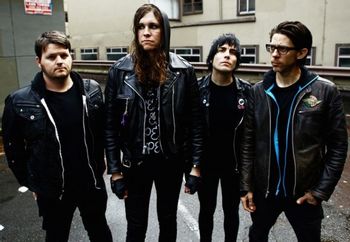 Against Me! is a Punk Rock band from Gainesville, Florida. Started as a solo acoustic/folk punk project by seventeen-year-old Laura Jane Grace, Against Me! has been a full group since 2001. The lineup has changed over time, with Laura Jane Grace and lead guitarist James Bowman as the only consistent members. The band has released seven studio albums, most recently, Shape Shift With Me in September 2016. They've also released several EPs, two live albums, several demo tapes, and in 2004 a movie of their tour. Grace also released a solo album called Heart Burns and has written a book, Tranny, which was released in November of 2016.