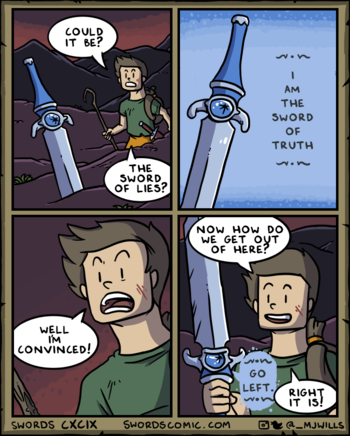 They say in every lie, there's a grain of truth. Especially if it turns out it wasn't a lie in the first place

.
"...Find a woman named Elizabeth Lemon. Get her advice, and then do the opposite."
— Jack Donaghy's video instructions for his expected child, 30 Rock
Advertisement:

Advice from certain classes of teammates—like The Ditz, or the Token Evil Teammate afflicted with Chronic Backstabbing Disorder—can usually be safely ignored. But, if a person (let's call him Bob) is wrong consistently enough, then Bob's teammates will eventually find his advice useful—by reversing it first. If Bob says to turn left at the fork, Alice will turn right. If Bob praises a given work, Alice knows that the work is terrible and should be avoided at all costs; conversely, if Bob pans a work, Alice knows that the work is a must-see masterpiece. If Bob says, "C’mon, Dick seems trustworthy to me!", Alice takes this as a sign that Dick is not to be trusted. And if Bob says, "Don't Touch It, You Idiot!", Alice knows that it's critically important that they touch the object in question as soon as possible.

In Real Life, this logic is fallacious; in fiction, Alice opens herself up to getting burned if Reverse Psychology or Dumbass Has a Point is in effect, or fall victim to a False Dichotomy. Of course, the Rule of Funny governs all, so it's just as likely that this logic works out perfectly for Alice.

For the subtrope of doing exactly the opposite of Bob because Bob is eeeeeeeeevil, see Hitler Ate Sugar. For praise producing a similarly negative reaction, see Your Approval Fills Me with Shame or Damned by a Fool's Praise. For characters rejecting information that turns out to be correct, see Cassandra Truth and Ignored Expert.

SpongeBob claims "moss always points to civilization", but Squidward doesn't listen and goes the other way. Then the camera pans to reveal SpongeBob was right -- there was civilization in the direction of the moss.

SpongeBob claims "moss always points to civilization", but Squidward doesn't listen and goes the other way. Then the camera pans to reveal SpongeBob was right -- there was civilization in the direction of the moss.