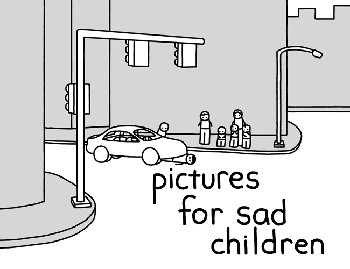 "whatever happens you guys will do great-ish things, probably. unless you don't, like most people. but you will be doing it together. unless you get divorced."
— Gary describes the toast he wants to give at his brother's wedding
Advertisement:

pictures for sad children is a webcomic by Simone Veil. The comic's original website was taken down (along with Veil forfeiting on her kickstarter

The comic features a minimalist style of art, humor, and grammar. Originally, the comic also featured character-driven stories about a ghost and some other people.

The two main characters were Paul and Gary, although sometimes the comic would follow the other minor characters for a little bit. Paul, who was a ghost, who was wearing a bedsheet, died just before the first strip. He wore the bed sheet to look ghosty of course. He hated everything and didn't care. Gary was a grad student who worked at a call center that took the overflow of Indian help lines. People called him and hilarity ensued.

After 226 pages, the story of Paul and Gary came to a very abrupt and inconclusive end. After that, the comic continues as an unconnected series of surreal one-shots with occasional story arcs but none as long as the big one.

The world of Pictures For Sad Children is cynical. Most of the characters are depressed even though they know that they have no real problems. The main characters also resign themselves to a life of unfulfilled dreams and crushing meaningless jobs. There are many magic realist elements to the world as well, like an iPod that plays you your regrets, a family that has the powers of Jesus, and passive-aggressive post-it notes that seemingly come from no one.

In February 2014, Veil tore down her entire webcomic page, and burned the unshipped books (encapsulated dead wasps and all) that she promised to her Kickstarter backers. (In May of that year, Max Temkin of Cards Against Humanity fame managed to obtain and ship all of the originally promised books.)