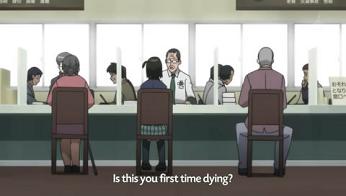 If it is, there's some forms to fill out.
Calvin: I wonder where we go when we die.
Hobbes: Pittsburgh?
[Beat]
Calvin: You mean if we're good or if we're bad?
— Calvin and Hobbes
Advertisement:

Welcome... To Hell! I'm Old Scratch, and I'll be your waiter tonight. The only table we have is by the bathrooms, the specials menu only has food you're allergic to, there's a massive markup on the wine, and I'm afraid we're a bit busy at the moment, so the wait is... All Eternity!

This is a popular portrayal of the afterlife in comedies and Urban Fantasy: Heaven and Hell are much like our own universe, only flanderized to be either perfect (but often not totally perfect) or unbearable (but in a much more annoying than angsty way). For some reason, restaurants seem to be a popular depiction, as waiting for your food can feel like being stuck in purgatory.

It may be A Form You Are Comfortable With for souls who are still living who see or visit it, or an Afterlife Antechamber for those not yet ready to move on to a more mysterious Offscreen Afterlife.

May take form of a City of the Damned. Can overlap with Celestial Bureaucracy, A Hell of a Time, or Ironic Hell. Compare Cool and Unusual Punishment.

Dilbert finds out what the afterlife is like. It's just an office cubicle.

Dilbert finds out what the afterlife is like. It's just an office cubicle.