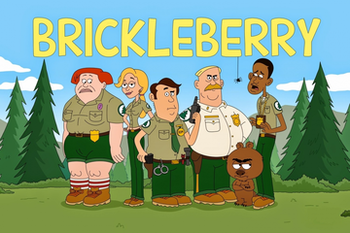 Fucking Auschwitz would get a better Yelp review.note From left to right, Connie Cunaman, Ethel Anderson, Steve Williams, Woody Johnson, Malloy, and Denzel Jackson.
Brickleberry was an animated series that aired from 2012 to 2015 on Comedy Centralnote although most countries aired the show on networks owned by Fox Networks Group instead of Comedy Central as the rights to the show are owned by 20th Century Fox and not Viacom., produced by Daniel Tosh. It features a group of incompetent park rangers operating a national park called Brickleberry and a hateful, spoiled pet bear named Malloy who was adopted following his parents' death (that was caused by one of the rangers Steve himself). The show takes many nods from Seth MacFarlane's shows (specifically Family Guy), mainly for its similar art style and use of heavy vulgar humor. The series was created by Roger Black, best known for his previous work as Yucko the Clown on The Howard Stern Show, and Waco O'Guin, who both worked previously together on MTV with their sketch comedy series Stankervision.
Advertisement:

Brickleberry is notable for being one of the few animated series to switch from Adobe Flash to traditional animation (most animated shows go the other way around, due to budget cuts or Executive Meddling of some kind). It's also notable for being renewed twice, despite many disparaging reviews. Despite this, the show was eventually canceled by the network in January 2015, with the last three episodes (see Recap) being burned off between late March and mid-April.

In July 2016, Dynamite Entertainment began publishing a 4-issue comic book miniseries that continues where the season three finale left off. Creators Waco O'Guin and Roger Black expressed interest in finding a new home for the show to have created a Season 4 and continue off from where the series had ended. They announced the comic book material is what they planned out for Season 4.

Black and O'Guin later went on to create Paradise PD for Netflix, which is like Brickleberry humor-wise, but does develop the characters more and has a running story rather than being episodic. After 5 years of a hiatus from new episodes, Brickleberry returned in a crossover episode in Season 2 of Paradise PD.