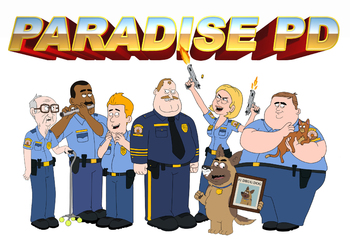 Paradise PD is an adult animated sitcom released on Netflix on August 31, 2018. It was created by the team behind, and is largely a Creator-Driven Successor to, Brickleberry: Roger Black and Waco O'Guin.

The show follows 18-year-old rookie cadet, Kevin Crawford, joining a small-town police department called Paradise P.D. and its crew of bad cops. Not bad like no-nonsense or cool. Bad like shitty. The shortcomings of these cops range from corruption, incompetence, to dabbling in crime themselves.

Kevin's hot-headed father and chief of police, Randall was against his son becoming a cop, after a time, when a 5-year-old Kevin accidentally shot him in the testicles, causing a chain reaction of events, where Randall would lose testosterone, fell emasculated, and try to feel like a man again by being a hateful, misogynistic dick to his wife, Karen, who later divorced him and went on to become the mayor. As mayor, Karen gave Kevin a job at Paradise P.D. out of love for her son and spite for her ex, (mostly the latter) and thus begins the premise of Paradise P.D.

The overarching storyline of the first season focuses on the police force trying to crack a drug bust, where a fancy new drug called argyle meth is sweeping the streets of Paradise, all originating from an unknown crime boss, known only as "The Kingpin". However, Kevin seems to be the only one who actually cares about solving the case, as while his father blows it off as unimportant, he sees it as being deeper than it may seem.

The main/major cast is as follows:

From the moment it was first advertised, people expected Paradise P.D. to be a carbon copy of Black and O'Guin's first show, Brickleberry. However, when the show aired, they got ... exactly that but this time, the show was more serialized, telling an overarching story, which spanned the entire season. It also managed to be better received. Indeed, to many people's surprise, it did exceptionally well in ratings and quickly became Netflix's fifth smash-hit adult animated series, following BoJack Horseman, F is for Family, Big Mouth, and Disenchantment and got picked up for another season, which, although intended to air in 2019, due to production mishaps, went through a bit of a delay, before it finally aired in March of 2020, (mere days before the effects of the coronavirus really took its course worldwide). The second season did so well, that three days after its release, it warranted a third season, which aired on March 12th, 2021. On June 30th, 2022, the show was renewed for a fourth and final season, which aired on December 16th.