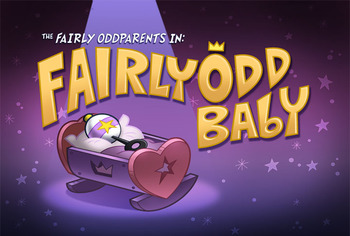 It flips your lid when you have a kid!
"Welcome to Sesame Street and the world."
— Big Bird to the newborn Gabi, Sesame Street
Advertisement:

People have babies. If they didn't, there wouldn't be a me or a you. And sometimes, in a serialised work such as a TV show or a book series, you'll have an entire episode devoted to a newly-arrived bundle of joy. That's what the New Baby Episode is.

Most of the time, this new baby is being born, though they might also be being adopted. The episode might mostly focus on the pregnancy or adoption process and have the baby be born at the end, or it might start with the birth or adoption and spend the rest of the episode devoted to the baby.

Children's media will usually feature an older sibling, who will find the baby annoying or be jealous of them, yet will end up learning to accept the baby, usually with An Aesop about how the parents love both kids equally.

Comedies will usually play the baby as incredibly hard to look after— the baby might spit up a lot, go through a lot of diapers, require the parents to act goofy in order for it to sleep, keep the parents up all night, cry a lot, or a combination. In these situations, the baby might have a Bumbling Dad and/or a Maternally Challenged mom, and don't even get us started on when there's Too Many Babies.

Compare First Pet Story for a different kind of cute new arrival and Parents for a Day for when a character only becomes a pseudo-parent temporarily. Could result in Away in a Manger if it's during a Christmas Episode. Can be subverted with a Convenient Miscarriage, Tragic Stillbirth, Pregnancy Scare, or the woman being Mistaken for Pregnant. On the subjective side of things, it could lead to the show Jumping the Shark or Growing the Beard.

Important: It must be the sole focus of an episode or at least a subplot. Just people having babies on its own is People Sit on Chairs.