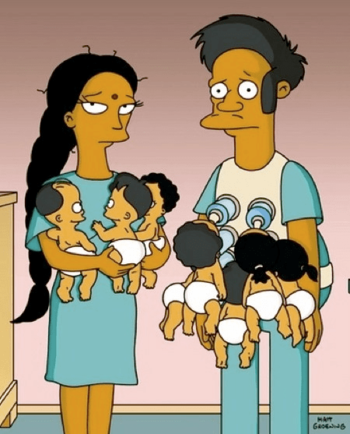 Who knew you could overdose on fertility pills?
A woman has babies. That is, she gave birth to multiple babies at the same time, and now she, with help from her husband, has to figure out how the heck to deal with this many kids at once. Hilarity Ensues.
Advertisement:

Often the defining feature of works that it appears in for the simple reason of plausibility. Babies are a lot of work, and anyone who has this many is pretty much going to have to center a great deal of her life around them. While one would think that this would make the parents a little high-strung and frustrated with their baby-centered lives, quite often Babies Make Everything Better anyway, despite the extremity of the situation. When used as a brief gag, it's usually tongue-in-cheek.

This trope came to prominence because of the relatively high chance of multiple births in the early days of in vitro technology. This was due to the procedure (no longer practiced by most above-board facilities) of implanting multiple embryos under the assumption that only one would actually take. While this is the extreme version of the trope, more down-to-earth works of fiction can still play this up with twins.

Compare and contrast Massive Numbered Siblings, when there's a large number of children but they were born one (sometimes two) at a time.

If a sight gag is made out of the many babies forming a conglomeration that looks like a flood or a tidal wave, see Wave of Babies.