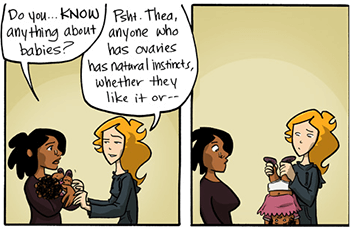 "I don't know nothin' about birthin' babies!"
— Prissy, Gone with the Wind
Advertisement:

This is a not-so-rare subversion of women-as-maternal which occurs when a female character, usually a successful career gal, is revealed to know little or nothing about taking care of a baby. This will almost always be revealed by a plot in which she is forced to take care of a baby, temporarily if it's in a series. If it's not in a series, the Maternally Challenged will probably be adopting the baby permanently. Often, other characters will just assume she knows what to do since she's a woman. But she doesn't, and Hilarity Ensues.

This is Truth in Television. Humans are one of the few mammal species who do not instinctively know how to care for their offspring. Partly because it's a lot more complicated for us, what with the time they take to grow, but mostly because we are social animals that learn child care from our elders instead of having instinctive reactions. The former has the advantage of more flexible behavior that can quickly adapt to new situations while the latter does, of course, not require any parent or social group and no learning effort, which saves the animal time and resources.

Compare to Raised by Dudes, which is a rough male equivalent. Subtrope of Parents as People. Frequently paired with Career Versus Family.