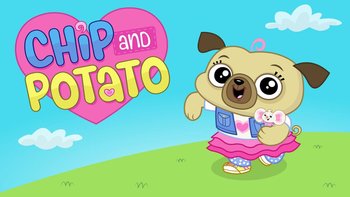 Chip and Potato is a Slice of Life animated series co-produced by DHX Media and Darrall Macqueen. The series originally aired on Family Jr. on October 15, 2018, before making its international debut on Netflix seven months later on May 17, 2019.

The show follows a young pug named Chip, and her secret best friend, Potato. However, Potato is actually a real mouse who must be kept a secret from everyone else. The series is notable for being one of the first animated shows aimed at preschoolers to feature a Story Arc, as Chip goes to kindergarten for the first time and overcomes her problems. The show is mildly serialized, as whatever is happening in the next story will be briefly alluded to in the previous one.