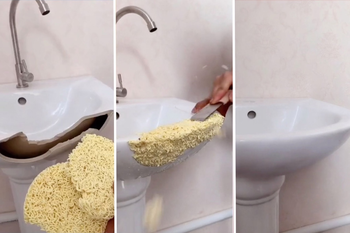 That's not what I meant by "use your noodle"...
"We'll live underground. Use bacon for clothes."
— Sam Sparks, Cloudy with a Chance of Meatballs
Advertisement:

"If I knew you were going to use it for that, I wouldn't have made it delicious."

A lot of work goes into making food. Only certain plants and animal parts can be made to be safely edible, and making it taste good is often a whole additional process.

So when food is used for adhesive, lubricant, spacers to keep the chair from wiggling or shampoo, it's either Played for Laughs - especially if it obviously wouldn't work in real life- or used to show how desperate a situation is that the protagonists are using the food reserves for building material or medical supplies.

In some instances, food is used for non-consumption purposes because it tastes so bad that no one wants to eat it. Common for food that's Way Past the Expiration Date or cooked by a Lethal Chef.

Food that is used as clothing is often played for humour because the ideal properties of food and clothing are often opposite of each other.

The association of food and sex is highly cross-cultural and often juxtaposed as similar acts of satiation and sometimes that means actually using food for sexual gratification, either to demonstrate a character's decadence or wastefulness or to be played for humour since, obviously, that's not what you're supposed to do with food.

A Sub-Trope of Not the Intended Use.

Food used as a Chekhov's Gun shouldn't be included unless the fact that it's food is significant.

Because Everyone Hates Fruit Cakes, that particular item is commonly shown with multiple uses besides eating.

The inverse of I Ate WHAT?!, which is when strange, often inedible substances are eaten as food, to the surprise and disgust of the consumer. Contrast Extreme Omnivore, when people deliberately and willingly eat inedible items. See also Anthropomorphic Food, where the food is people and thus would as a result would be doing all sorts of things food doesn't do. Can be used to invoke A Bloody Mess. Compare Cordon Bleugh Chef and Bizarre Taste in Food, for when the food is still meant to be eaten but is still used in a strange way. For unconventional drink usage, see Bizarre Beverage Use.