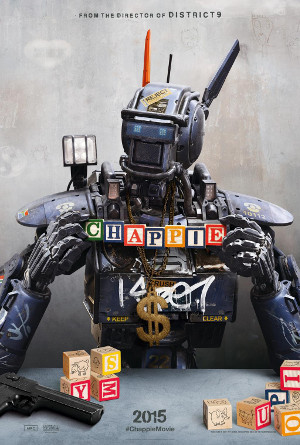 RoboCop turned RoboGangsta.
”I am consciousness. I am alive. I am Chappie.”
Advertisement:

Chappie is a 2015 sci-fi movie by Neill Blomkamp, based on his short film Tetra Vaal, about the world's first artificially-intelligent robot as he grows up in Johannesburg, South Africa. It stars Sharlto Copley, Sigourney Weaver, Dev Patel, Hugh Jackman, and the South African rappers Die Antwoord.

Rampant crime in Johannesburg has driven the development of droids by Tetravaal, a Private Military Contractor, to assist human police officers. Deon Wilson is a programmer working for Tetravaal who creates a truly intelligent AI that can learn, think, and feel like a human. He plans to test the AI on a damaged droid chassis, but he is forced to activate it for a gang eager to pay off a debt. Naming him "Chappie", the gangsters raise the childlike AI to help them with a heist.

Chappie beats Vincent Moore within an inch of his life.

Chappie beats Vincent Moore within an inch of his life.