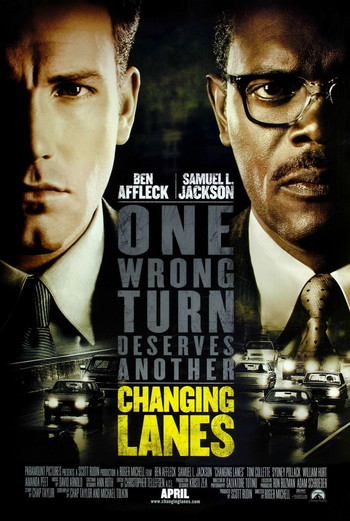 Doyle Gipson (Jackson) is an insurance salesman and father who is down on his luck. He is a recovering alcoholic whose ex-wife has threatened to take the boys with her from New York to Oregon, effectively killing his chances of seeing them regularly, or of ultimately reconciling with her. Doyle believes that he can convince his wife to change her mind by proving that he has changed since their separation - he's remained sober, kept a steady job, and is even on the verge of securing a loan to buy her and the boys their own house so that they won't have to move. To get that chance, however, he has to show up to family court to convince a judge to side with him, and rule in favor of keeping the boys in the city they grew up in.

Gavin Banek (Affleck) is a successful young attorney and a partner at his father-in-law's high-class law firm. After delivering a speech at an event designed to honor the charitable donations of a recently deceased multi-millionaire, Gavin tries to pay his respects to the man's granddaughter, a former friend of his who now refuses to give him the time of day. She is furious over the fact that Gavin convinced her grandfather on his deathbed to sign a document giving control over his expansive trust to Gavin's firm... a decision that just so happened to make Banek's fellow partners a handsome sum of money after they dissolved the board of trustees. While the bereaved granddaughter is suing to have control of the trust taken from the law firm, Gavin is certain that the judge will side with him once he delivers the signed, notarized Power of Appointment at their upcoming hearing.

The fates of these two men quite literally collide one morning when both of them, distracted by the legal battles ahead, crash into each other on the freeway on their way to the courtroom. While the turn of events is most certainly an inconvenience for both of them, Doyle insists they "do the right thing" by exchanging insurance information and waiting for the police to arrive. Gavin refuses, and after futilely attempting to pay off Doyle with a blank check, hurriedly jumps back in his car and speeds away. In the process he leaves Doyle, whose car was totaled in the accident, stranded... and also leaves behind the folder containing the Power of Appointment he needs to win the case.

When Banek realizes that he no longer has the file in his possession, he convinces the judge to give him until the end of the day to retrieve it. However Doyle, who is now in danger of losing his children since he failed to show up in time for his own court appearance, refuses to return it. In desperation, the lawyer hires a "fixer" to put pressure on Doyle by canceling his bank accounts, putting the man's loan — which is his only remaining chance of convincing his ex-wife to stay — in jeopardy. Not one to be pushed around, an enraged Doyle delivers Gavin an ultimatum: make things right, or the file gets destroyed. From there, the two men enter an ever-tightening spiral of revenge, at the center of which they are bound to collide once more... this time, with potentially deadly results.