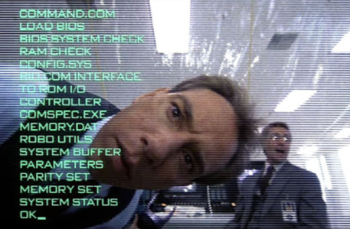 Whenever the camera assumes the POV of a robot, we see how the robot sees the world, which is always as a kind of computer readout. It's usually slightly pixelated, often tinted, frequently has a grid laid over everything, and very often prone to dissonantly simplistic graphics in the overlays, sometimes with a preference for shades of green above all other colors. They can zoom in and out, and are capable of picture-in-picture (e.g., when they see a person they might bring up a file photo of them). Most importantly, words, numbers, enemy strengths and weaknesses and various other data will flash across the screen, identifying people and items, reminding the robot of its objectives, contemplating possible courses of action, or sometimes just flashing little scrawls of code that mean nothing to the viewer.
Advertisement:

This isn't just limited to robots: in Cyberpunk settings, a human character with implanted cyber-eyes may have a vision field like this, complete with sensor read-outs, crosslines superimposed over enemies he's aiming at, or picture-in-picture for an incoming videophone message. Alternatively, a character connected to a robot drone via a cyber datalink will be able to see through the sensors of the drone.

The readout almost always contains jokes. In comedy they will be blatant jokes such as the robot identifying a person with the least flattering terms possible, while in serious efforts the jokes are usually hidden little shout outs. Another common joke is to show living, organic characters perceiving the world around them this way, suggesting that whatever activity they are performing, they are doing so in a robotic, slavish manner.

This trope is more of a Translation Convention, to make the robot's state of mind clear to the audience, than it is a realistic depiction of how robots see In-Universe. It would, for the most part, be pointless to display all this information—ostensibly for the benefit of the robot itself—on the robot's own vision. After all, the information comes from the robot's own memory banks. Are we to understand that when the robot wants the lowdown on what it's looking at, it sends the data to its screen, converts it to a readout, and reads it off of there? Why can't it just remember stuff directly like a normal person? note Aside: the question of how much of our internal life is "visualised", how much is "abstracted", and the effect this has on human nature is the subject of a great many philosophical thought experiments involving robots. On the other hand, this objection applies less to humans with cyber-eyes: if they don't have direct neural link between their brain and a computer, then a visual display of data is a plausible in-universe means to convey the information. A possible reason for "pure" robots to do this is that they're letting someone else use their enhanced vision and projecting the info for the meatbag's benefit.