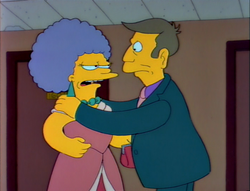 Worried that Selma is depressed over being single and childless, Marge orders Homer to find Selma a man — but ends up pairing Principal Skinner with Patty by mistake. Meanwhile, Bart is sentenced to reseed the school's field with Groundskeeper Willienote in his first appearance after spelling his name out on it with a herbicide he created in science class.