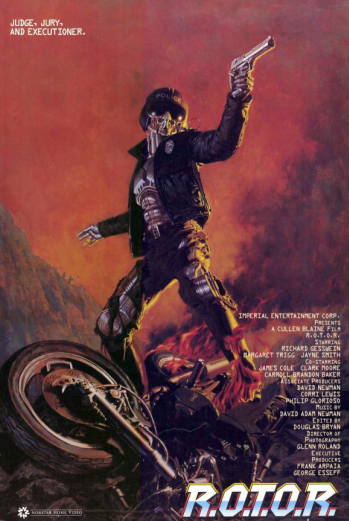 Not quite the maximum force of the future.
"My objective was pure enough: To make the streets of the city a little safer. Where gangs of punks, dope dealers and the rest of society’s scum could be effectively controlled, and hopefully eradicated. A controlled army of police robots could stop the slaughter of the hundreds of policemen who sacrifice their lives every year in the protection of those they serve. But how do you stop a killing machine gone berserk, with only a go button and no compassion?"
— Barrett Coldyron
Advertisement:

Robot cop goes berserk. Creator hunts it down. You know the drill.

Barrett Coldyron is a cyberneticist with the Dallas Police Department. To save society from itself, he works to create a perfect robotic lawman, codenamed Robotic Tactical Operations Research. It will be four years before the kinks are worked out,note He estimates that in 25-40 years, society will have degraded enough to need the robot but Coldyron is a patient man. Unfortunately, a conniving politician demands that the prototype be released in its current form, and Coldyron resigns in protest. The project is taken over by a couple of bumbling subordinates, who accidentally launch R.O.T.O.R. on a killing spree. It's up to Coldyron to stop it.

R.O.T.O.R. was written, produced, and directed by Cullen Blaine Houghtaling, who had previously worked mainly as a storyboard artist for Saturday morning cartoons. It was released in 1987, quick on the heels of RoboCop. It started getting a reputation as classic trash, making the rounds of bad movie sites such as Jabootu,

In 2013, it was featured in an episode of Best of the Worst, where its cheesy charms were revealed to a new generation of B-movie enthusiasts. In 2014, the film became the subject of a comedic commentary by RiffTrax, with some of the best quotes documented here. After languishing in obscurity for a quarter of a century, R.O.T.O.R. continues to languish, but not in quite as much obscurity as before.