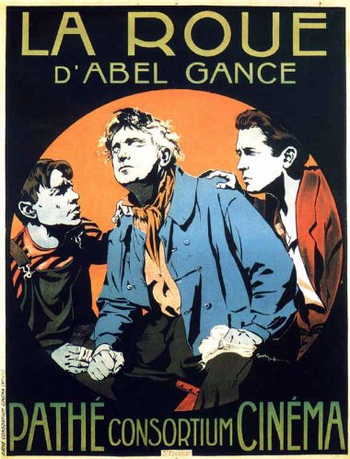 "I know that Creation is a Great Wheel which cannot move without crushing someone!"
— Victor Hugo, as quoted at the start of the film
Advertisement:

La Roue ("The Wheel") is a 1923 French silent film written and directed by Abel Gance, who would go on to write and direct Napoléon. The "wheel" of the title is a recurring motif throughout the film, and is ultimately a metaphor for life itself.

After widowed railroad engineer Sisif finds an orphaned baby girl named Norma, he adopts her to raise alongside his biological son Elie. Fifteen years later, She Is All Grown Up, and Sisif is acting the Overprotective Dad. In truth, he is attracted to his own adopted daughter. Elie, who has become a violin maker, is also attracted to Norma because of course he is. Sisif makes the mistake of revealing the truth to unscrupulous businessman Jacques de Hersan, who is (you guessed it) attracted to Norma. After a bit of Blackmail, Hersan gets Norma's hand in marriage and takes her away to live with him in Paris. Meanwhile, Sisif's eyesight is damaged in an accident, and he is reassigned to run a funicular train in the Alps. Norma, who is unhappy in her marriage, visits the same area with her jealous husband. Suffice it to say that their reunion with Sisif and Elie is not a happy one.

Upon its original release, La Roue came in at a whopping 32 reels, running for either (sources are conflicting on this) seven and a half or nine hours. While the 1923 theatrical cut distributed more widely ran for 140 minutes, the most frequently-seen and circulated version currently in existence is "only" four and a half hours, although a 2019 restoration added over two further hours of rediscovered footage to yield a 'full cut' (or the closest possible equivalent modern audiences may ever see) clocking in at an astounding six hours and 57 minutes.