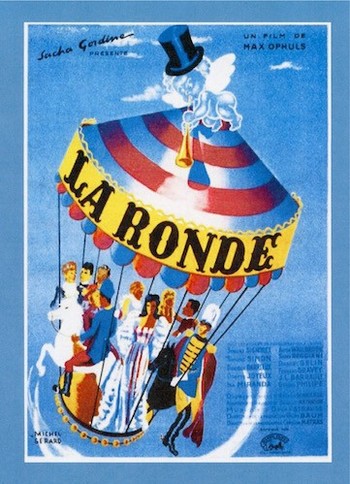 La Ronde, also known as Reigen, is an 1897 play by Arthur Schnitzler. It wasn't performed till 1924, and then it was deemed obscene and shut down.

The play takes place in Vienna in the 1890s and consists of 10 love scenes between pairs of people. There are 10 characters, each playing in two adjacent scenes (counting the last as adjacent to the first). The play starts with The Whore and The Soldier, followed by the Soldier and The Parlor Maid, and so on in this fashion until making full circle with The Whore back in the first scene.

Schnitzler's original subtext was the spread of syphilis, though most modern adaptations concentrate on the characterization of people in their unguarded moments.

It's been filmed three times: the 1964 film La Ronde, directed by Roger Vadim; Reigen (the original title of Schnitzler's play), a 1973 film directed by Otto Schenk, and the 1950 film La Ronde by Max Ophuls, the latter containing the famous La Ronde waltz

It's been adapted for the stage by David Hare as The Blue Room (in which two performers played all the roles), by Michael John LaChiusa as a musical, Hello Again (which shifts decades for each scene, though the characters remain the same- this has also now been adapted into a feature film) and by Eric Bentley as Round 2 (a Gay version set in The '70s New York City). The 1950 film had an All-Star Cast of French and European cinema of the day that included Anton Walbrook, Simone Signoret, Simone Simon, and Danielle Darrieux.

The Theme Park in Montreal is completely unrelated.

The play is in the public domain and may be read on the internet: see here