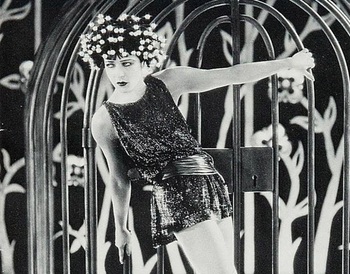 Salome is a 1923 silent film starring and produced by Alla Nazimova.
Advertisement:

Based on the Oscar Wilde play of the same name, it's about the eponymous Judean princess who demands John the Baptist (called "Jokanaan" in both play and film) beheaded because he refused her sexual advances. Natacha Rambova designed the highly stylized costumes and sets, which were based on the illustrations Aubrey Beardsley created for the original play.

The film was a passion project for Nazimova, who, in addition to producing and playing Salome, put her own money into it. She was left financially ruined when it proved to be a Box Office Bomb. Critical reviews were mixed at the time, but it's since come to be regarded as a groundbreaking art film. It was added to the National Film Registry in the year 2000.

According to rumor, the film had an all-LGBTQ cast as a tribute to Wilde's sexuality. You can believe that if you want. It's true enough that Nazimova herself was either lesbian or bisexual. In any case, the film has often been shown at LGBTQ-oriented film festivals.

Not to be confused with the 1953 film of the same name, which was based on the same Biblical story, but unrelated to the Wilde play.

In addition to the tropes present in the original play, this film includes examples of: